As well as any other village in the eastern part of the island of Hvar, so is the village Bogomolje very difficult to catch in a single take. It seems huge, stretched along a narrow and very uncomfortable old road that almost does not connect, but separates the two parts of the island. The village actually consists of several hamlets that are couple of hundred meters or even kilometres distant from each other. Although this area has been inhabited since prehistory, and in the Middle Ages wheat was planted there for the needs of the municipality, Bogomolje experienced the destiny of many island towns and villages: after a period of prosperity and success at the beginning of the 20th century, when more than 800 inhabitants lived in this scattered village, the adverse economic situation, world wars and the dying out of village life caused displacement of the local population all over the world. Therefore, according to the last year’s census, there are only about a hundred people living in the village.

However, it is nice to know that a few years back the school building was brought back to its function, meaning that the small village of Bogomolje now has six or seven students who are returning hope and life to the almost extinct village. Additionally, Ivo Radojković, who originates from the village of Bogomolje, but has residence in Hvar, recently opened one of the cutting-edge plants for production of olive oil. The products of his oilmill regularly win awards and recognitions on the global level.

If it were not for the murmur and laughter of children and the pungent smell of the olive oil, the village of Bogomolje would look like a deserted open-air museum. There is a road widening that functions as a some sort of local square, with an old-fashioned shop, a monument to those who were killed in the World War II, the ruins of a once powerful cooperative, a lonely town hall and a small church made of stone shaped in a rustic way, which makes it seem older than it is. It is a reminder of the events of a hundred years ago, when a part of the Catholic priests rebelled against the organisational structure of the church for political reasons and founded their own fraction called the Old Catholic Church. The priest of Bogomolje won over a certain number of villagers and they had the church built in the centre of the village. The Old Catholic Church fraction was active until the World War II, and today the building stands eerily empty and silent, stuck in a tumultuous moment of even more tumultuous history. 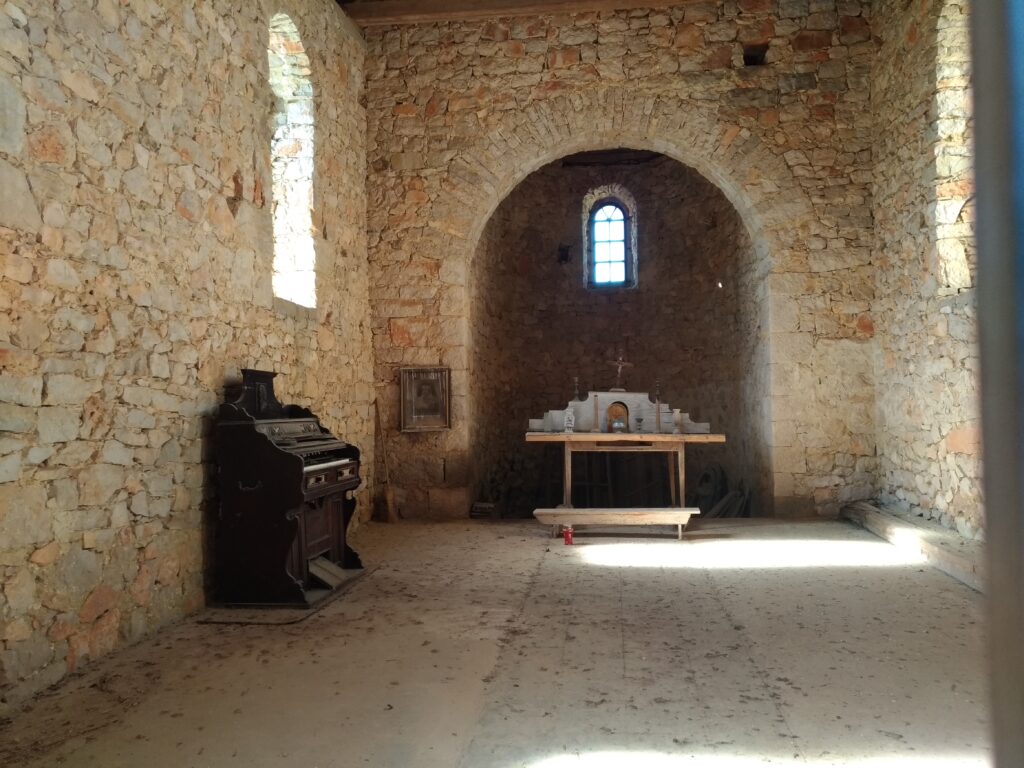 Although many local people left Bogomolje for various reasons, they did not abandon their tradition. Due to the fact that they jealously kept their memories and inherited knowledge alive, this place offers a handful of original and versatile recipes. These recipes show us how much the local people had to be imaginative and improvise with the available food at the times that were often unstable and troublesome. They had to learn how to listen and get to know the rhythm of the nature, but also to be very creative and look forward to every “tiny little bit richer meal” on their plates. The recipes bellow were collected and presented by the archaeologist Nikša Vujnović, whose family on the mother’s side originates from Bogomolje, according to the records of his relative Gordana Barbarić, née Matijašević (1940.), who inherited the recipes from her mother Perica Matijašević (1910 – 2002)

Bobuc (broad bean) – Bogomolje snack or finger food
Zeleni bobuc (green broad bean) (broad bean with smaller beans) is cooked in the pod for about thirty minutes. Then, it is drained and put in a bowl. The beans are removed from the pod and seasoned in several ways:

The ripe prickly juniper Juniperus oxycedrus is added to the broad bean. They are not cooked, only salted and eaten with fingers.

Put finely chopped onion, tomatoes and olive oil in a wider pot (mother Perica used to put it in a wide frying pan). Let it simmer for a short period of time. Then add a little water, pepper and salt. When it boils add bread crumbs (iz kopanje) (that would remain on the walls of the bowl after taking out the bread dough) and stir with a wooden spoon for another 15 minutes until it turns into gruel. This dish is eaten with spoon.

Fish (smelt, bogue, picarel) is cleaned and gutted, their head is cut off. Add finely chopped scallion, onion, parsley and canned tomato into a cooking pot. Fry them shortly, add water and white grapes, then salt and pepper (wild pepper from the garden). Simmer 5 to 6 minutes and then add fish and simmer for another 15 minutes. Eat warm, about an hour after cooking, with a fork.

Cleaned hog casings are filled with the following mixture: whole wheat flour, pig blood, chopped lard, salt, pepper, cloves, cinnamon, nutmeg and finally water. Make a loose mixture by mixing all the ingredients. Fill the hog casings with the mixture using a funnel. The casings were stuffed with the mixture using a wooden branches (evergreen oak, strawberry tree or pomegranate). When the casing is stuffed, the ends are tied and a round sausage is formed (divenica) of approximately 50 cm. The sausage is cooked in a large pot for about half an hour. Then it is left to get cold on a large plate. Upon cooking, divenica is ready to be eaten. It can also be hung next to the fireplace to get dried. Besides the hog casings the same mixture was used to fill pork giblet. Lightly dried divenica is eaten fried or cut to pieces. Additionally, they were also grilled in one piece.