Easter –‘Pascha’ in Greek– is considered the greatest celebration of the Eastern Orthodox Church and is demonstrated with religious ceremonies followed by various customs.

Easter symbolizes the death and resurrection of Jesus Christ and is commemorated all over the mainland as well as the islands and is an important family feast. Its roots originate from ancient times, as it marked the change of seasons and the arrival of spring.

Preparation for Easter begins with Clean Monday (‘Kathara Deftera’ in Greek), marking the first day of Great Lent. During the Lent period – lasting forty days before Easter – one is supposed to abstain from consuming food products deriving from animals, fish, and poultry, in short anything containing blood. Dairy products, eggs and butter, are also included in fasting. Most people though, abstain only from meat during this period but are more lenient on other products.

Holy Week (‘Megali Evdomada’), a week spanning from Palm Sunday to Easter Sunday, is essentially a revival of Jesus´ last days on earth. Church services are held every evening, and it is a habit for housewives to tidy up their homes in expectation of Easter’s celebration.

From Holy Monday to Holy Wednesday, there are no typical customs that take place besides the church masses. Holy Monday’s ceremony is dedicated to the life of Joseph, son of Patriarch Jacob, who was sold as a slave in Egypt. It also refers to the parable of the barren fig tree that Christ, finding no fruit to appease his hunger, cursed the tree, causing it to dry. The moral of the story symbolizes the soul of every human who lacks virtue.

Holy Tuesday’s mass preaches the parable of the Ten Virgins, with its teaching about vigilance, and Christ as the Bridegroom. According to the Gospel, ten virgins await a bridegroom; five have brought enough oil for their lamps for the wait, while the oil of the other five runs out. The five virgins who are prepared for the bridegroom’s arrival are rewarded, while the five who went to buy further oil miss the bridegroom’s arrival and are disowned. The bridal chamber is used as a symbol not only of the Tomb of Christ, but also of the blessed state of the saved on the Day of Judgement.

The mass held on Holy Wednesday is dedicated to St. Mary Magdalene, a disciple of Jesus Christ. According to the Gospel accounts, Mary Magdalene repenting of her past dissolute life, came to the Savior Jesus to ask for his forgiveness. She bent her knees and washed Christ’s feet with myrrh. The Ordinance of Foot-Washing is today an Ordinance of Humility and symbolizes the cleansing that only comes from Christ. Jesus saw her faith and sincere contrition, cleansed her of seven demons, and thereafter she followed him wherever he went. She was one of the witnesses of the Crucifixion and burial of Jesus and was the first person to see him after the Resurrection. The second theme of the mass is the agreement made by Judas Iscariot to betray Jesus. 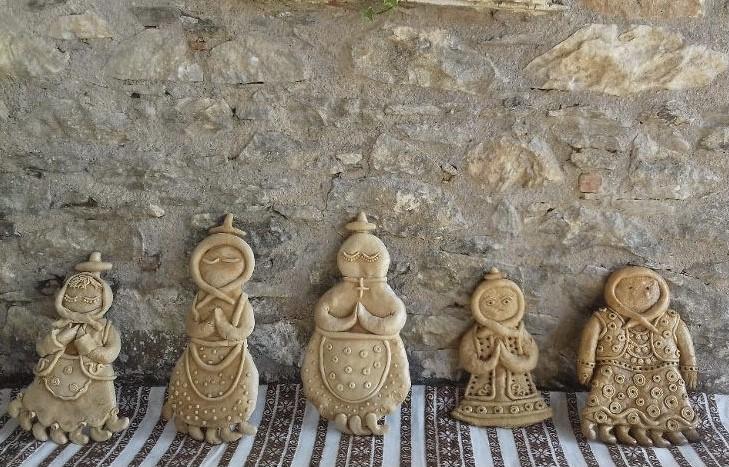 Following Holy Thursday’s evening mass, after reading the Twelve Gospels, a group of men and women undertake the task of decorating the Bier of Christ (‘Epitaph’) with various colored flowers, preparing it for the morning of Holy Friday.

Holy Friday is a day of grief and mourning, and masses are held in the morning and in the evening. During morning mass, the body of Christ is put down from the Cross and the priest covers it with a white sheet before placing it in the Bier. People, in turn, kneel before the empty cross and osculate it. During evening mass, the greater part of the religious ritual takes place outside the church, by exception rather than the rule. Eventually, the ornate epitaph is carried out of the church by four or six men and accompanied by young girls, the renowned ‘Myrrhofores’ clad in white, and carrying baskets filled with rose petals. Myrrhofores symbolize the women carrying the holy ointment.

The priest leads the march and the believers follow holding a candle in their hands as an expression of commiseration to Christ’s death. The march terminates in the church, where the crowd shapes a circle and the Bier of Jesus Christ is held on the shoulders of its carriers before the church’s entrance. Every single believer has the chance to enter the church by passing under it; and therefore, get its blessing.

Holy Saturday is the last day of Lent and it is filled with preparations for the midnight meal, including a traditional soup called ‘mayiritsa,’ made of lamb intestines, dill, lettuce, and other herbs and greens.

On Saturday evening everyone gathers at church with their Easter candles (‘lambades’ in Greek). Children hold their lambada, a decorated white candle given to them by their godfather or godmother. Just before midnight, all the lights are switched off, as a symbol of Jesus’ descending to the kingdom of death, and a moment later the priest announces ‘Christos Anesti,’ i.e., Christ Has Risen. People start cheering, greeting, and kissing each other, and many fireworks go off. Each individual has his own candle and tries to get the Holy Flame from the priest’s candle. Every year representatives from the Greek Orthodox church transport to Greece the Holy Light, taken from the eternal burning flame at the Church of the Holy Grave in Jerusalem. The flame is spread from candle to candle all over Greece. Each person carefully carries their lit candle in order to bless their home by drawing a cross with the flame above the entrance for protection from all evil. Many Greek homes keep the flame burning in a traditional ‘kandili’ until the following Easter.

And then the feast begins. The ‘tsougrisma’ game begins when people break each other’s red eggs by hitting them against each other. The one with the strongest egg is said to have good luck for the whole year. The traditional saying is “You close your mouth with an egg when lent starts and open it with an egg when it finishes.” The first meal after Lent is usually the traditional Easter soup (mayiritsa), eaten after church.

Holy Easter is usually celebrated in the countryside because nature is in full bloom and «spring is sweet». Red Easter eggs, spit-roasted or oven-cooked goat or lamb, oven-cooked potatoes, stuffed vine leaves, cheese pies, spinach pies, feta cheese, as well as other Greek products and Greek Easter treats, like ‘kokoretsi’ (a dish consisting of lamb or goat intestines wrapped around seasoned offal, including sweetbreads, hearts, lungs, or kidneys, and typically grilled), are definitely on the menu. Roasting the lamb in religious symbolism goes back to the Old Testament when God asked Abraham to sacrifice his son and Abraham humbly obeyed and began preparing for the sacrifice. When Isaac saw what his father was doing, he asked, “The fire and wood are here, but where is the lamb for the burnt offering?” Although Abraham, acted with a heavy heart, still he could not disobey God’s order. When God saw Abraham’s faith, He ordered him to stop and sacrifice a nearby ram instead.

On that special day, brothers and sisters, cousins, parents, and grandparents – the whole kinfolk – gather together. Traditional Greek folk music can be heard everywhere and people indulge in lots of food while drinking and dancing all day long. It’s the perfect chance for family members to reunite!

Young and old people still observe the centuries-old traditions and rituals that lead up to Easter Sunday, the day of love. At noon the faithful go to church to hear the Gospel of Love (translated into several languages announcing to the world that Christ Has Risen) as bells toll joyously.

Traditions and customs serve as connective tissue for people who share the same language, and the same faith. Greek Orthodox Easter is a family festivity deeply rooted in traditions, many of which originated in the very distant past. Easter communicates a very optimistic message: that of love, hope, resurrection, and rebirth.  The fact that it happens in spring, a season linked to fertility, enhances the whole experience. Above all, it is the occasion of unity between peoples and societies.

‘Kalo Pascha’ then, Happy Easter to all!