Christmas and New Year’s Day are gloriously celebrated. The streets, lighted and decorated, contribute to the cheerful atmosphere. On the eve of those two celebrations, early in the morning, children go from house to house to sing the Christmas carols accompanied by the sounds of the triangles. (Back in the old day, the lady of the house would offer them sweets. These days, sweets have been replaced with coins.) Women used to make kourambiedes (Christmas butter cookies), melomakarona, (Christmas honey cookies with walnuts), tsourekia (brioche-like bread), as well as the traditional Christopsomo (Christ’s bread), a kind of bread decorated with patterns and a cross made either of dough or almonds and sesame. Usually, friends and relatives gather around the Christmas table. Food is plenty and the family atmosphere is overwhelming. After a long Christmas fasting period, the table is understandably lavish. The fragrant smells of foods permeate the houses. At Christmas, it is customary to eat stuffed turkey, turkey soup and pork, while on New Year’s Day chicken and spaghetti is the favourite plat de resistance. As for desserts, diples and other goodies are a must. 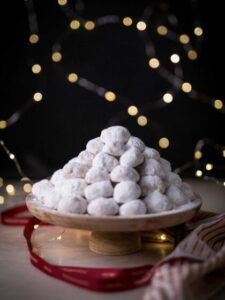 They’re also made as treats in engagement ceremonies, weddings, and Christenings, because of their white color which represents purity.

The ingredients comprise flour, sugar, butter, almonds, Metaxa brandy and vanilla flavour. They are then sprinkled with rose water and powdered with icing sugar, which makes them look like snowballs. Kourabiedes come in all shapes and sizes, however, there is a legend that states that during Ottoman rule, kourabiedes were crescent shape.

A week before Christmas all women of the family used to gather in a house to bake the traditional Christmas goodies: kourabiedes, melomakarona and Christopsomo (Christmas bread).

Melomakarona (μελομακάρονα) are among the most popular treats in Greece during the Christmas Holidays with their intense homely smell of cloves, cinnamon, and nutmeg making every house smell Christmasy!

The word “melomakarona” is a combination of the two words “meli”, which means honey, and “makarona”. “Makarona” comes from the ancient word “makaria” and means blessed. The ancient Greeks used to prepare something similar to the recipe that we use nowadays as an offering to God. During the past centuries, honey was added as a symbol of happiness and prosperity.

In the old days, melomakarona used to be served on the lead-up to Christmas as a Lenten “kerasma” (treat) to enjoy during the fasting season. Since no eggs or dairy are included, melomakarona are vegan and perfect if one is fasting or is on a vegan diet. 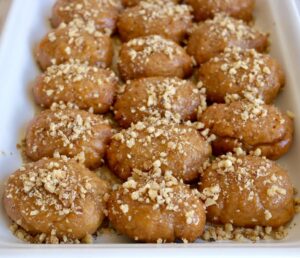 In some regions of Greece melomakarona are also called “finikia”. The traditional recipe for melomakarona and finikia is pretty much the same. The only difference is that finikia are deep-fried instead of baked.

Melomakarona are soft, moist, flavorsome, and soaked in delicious honey syrup. Once baked, the intense aromas spread throughout the house and bring back plenty of fond childhood memories!

Every year-end traditionally we knead diples (δίπλες). Diples is a very simple dough, rich with eggs and flour which we aromatize with oranges. They are rolled out in a fine layer, cut into strips and then fried. Once ready, we cover them with honey and walnuts. Originally people making diples would use what they had available in the house to make something nice to offer to their families and friends. In the countryside, all they basically had were some eggs, flour, olive oil to fry them in, honey and walnuts for topping.

“Dipla” actually means “folded”. When preparing the diples, you have to fold and refold the pastry while frying, resulting in a folded and lightly fried body of dough. The process of folding carries a deeper meaning. We are symbolically “folding” people together, binding them together with food. Sitting around the table we create friendships and family bonds, thus bringing everyone close together. These relationships are the most important and they are the ones that give true meaning to life. Diples, moreover, symbolise folding happy events in such a way so as to prevent them from running away.

In some regions of Greece melomakarona are also called “finikia”. 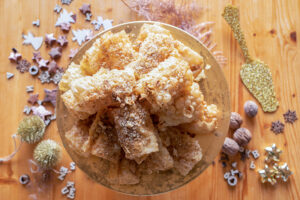 The traditional recipe for melomakarona and finikia is pretty much the same. The only difference is that finikia are deep-fried instead of baked.

Melomakarona are soft, moist, flavorsome, and soaked in delicious honey syrup. Once baked, the intense aromas spread throughout the house and bring back plenty of fond childhood memories!

Christopsomo (Χριστόψωμο) literally means “Christ’s Bread” and is usually prepared before Christmas. Baking Christopsomo is an old tradition and is considered sacred in Greece. The loaf is decorated with a cross on the top, representing the cross of Christ, and pieces of dough are added sympolising the family’s life such as their possessions, their animals if any, or other important items. The loaves can be simple or elaborately adorned so that the bread looks like a work of art, however, only the purest ingredients are used to make this special bread, the process of which is in fact an offering to Christ.

It is believed that Christropsomo strengthens the well-being, health and happiness of the household. Traditionally it is the lady of the house who makes the bread. She mixes together ingredients like walnuts and raisins into the dough and accordingly adds sugar or honey to sweeten it more. 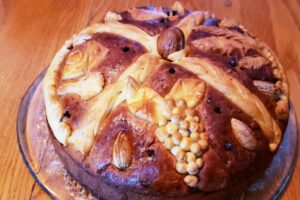 After kneading the dough, she uses the largest part to shape the bread. With the leftovers, she shapes smaller loaves of bread for her “Vaftistiria” (Godchildren). When they wait for her to bring presents for Christmas, they enthusiastically wait for the miniature of Christopsomo.

When the Christopsomo is baked, the father of the house blesses it by making the sign of the cross on top before cutting it and sharing it with family and friends.

New Year’s Day is the day we leave behind us sweet and bitter memories, the day we are filled with anticipation and impatience, a day werein we gather with our loved ones around a table and wait for who will be the lucky one of the year. It is the day of the most royal pie of the year triumphs: the Vasilopita cake (Βασιλόπιτα).

Vasilopita is the traditional cake or bread served at midnight on New Year’s Eve to celebrate the life of Saint Basil. After baking the Vasilopita cake, a coin (“flouri” φλουρί) is inserted in such a way so that no one knows where it is.

Vasilopita can be made of a variety of doughs, depending on the region, with almost every family having their own unique recipe. There are two main variations of Vasilopita – the cake version, and the tsoureki vasilopita version, which is the same as an easter tsoureki.

In most Greek households, the cake is served right after midnight on New Year’s Day, while some also serve it later in the day after the traditional New Year meal, together with some melomakarona, kourabiedes and diples!

When it’s time to cut the Vasilopita, the host of the house takes a knife and scores a cross on its surface. This has a religious meaning, but it also helps to cut even pieces. The first piece is offered to Christ, the second to the Virgin Mary and the third to the household. After those three pieces, the fourth piece is for the host, the fifth for the hostess and the remaining pieces offered, starting from the older member to the youngest.  If a close family member is away, he/she is also included. The one who finds the coin is considered to be lucky all year long and is given a symbolic amount of money or an award. If you have invited many people to your table, keep in mind to calculate the portions in advance.

Vasilopita is also traditionally cut and served in businesses and associations, usually during the first month of the year as a token to welcome the new year with health and prosperity.

The custom of Vasilopita goes back to ancient times when the holiday bread was offered by farmers to the gods during the agricultural festival season for favour and good luck with their harvest and sowing. 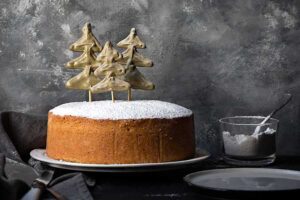 The Greek Orthodox custom of the Vasilopita, began in Asia Minor, and more specifically in the city of Caesarea in Cappadocia, more than 1600 years ago. This was during the time when Basil the Great, who later became a Saint, was Bishop of Caesarea.

Basil the Great, in order to free Cappadocia from certain looting, asked the nobles of the city to hand over to him as much gold and pounds as they could afford so that he could deliver them to the conqueror to avoid looting. Just before the conqueror arrived, the invading army miraculously withdrew and the city was thus saved. Saint Basil, Bishop of Cappadocia, having so much gold in his possession and not knowing whose and how much belonged to each, requested loaves to be baked werein he placed all donations of gold coins, precious objects etc., and eventually distributed the loaves to all citizens without discrimination. Hence, the tradition of Vasilopita and the “lucky” coin.